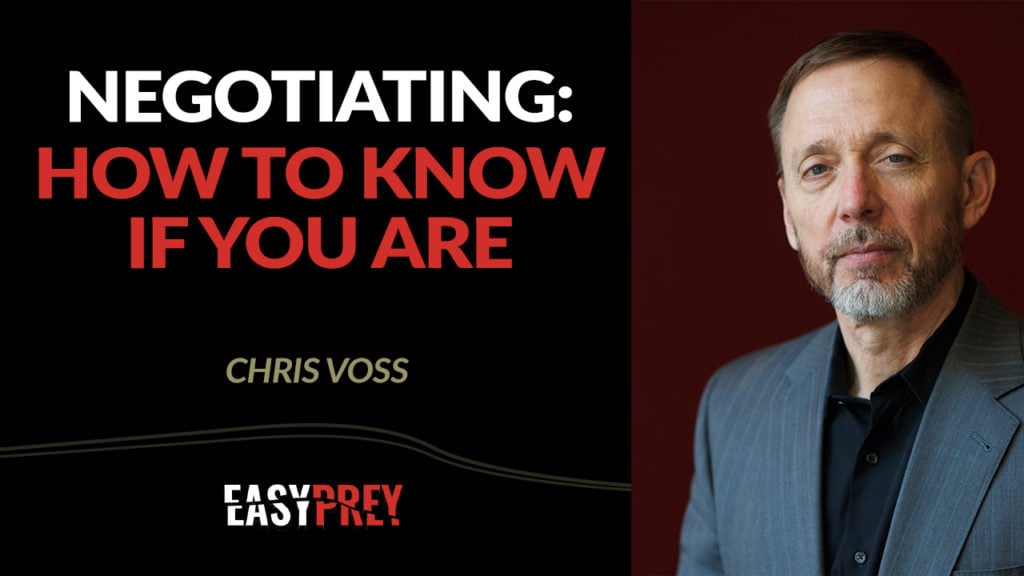 Negotiation isn’t just for hostage situations or big boardrooms. You can end up exchanging the commodity of your time without even noticing you’re in a negotiation. Chris Voss is here to teach you how to be more aware of these situations and negotiation techniques to negotiate better.


See Negotiating with Chris Voss for a complete transcript of the Easy Prey podcast episode.

Chris has 24 years of FBI experience and is a former lead international kidnapping negotiator. He was trained in negotiation not just by the FBI, but also by Scotland Yard and Harvard Business School. He taught business negotiations in MBA programs at numerous schools of business, wrote the negotiation how-to book Never Split the Difference, and is the founder and CEO of The Black Swan Group, which applies globally-proven negotiation techniques to the business world.

The Foundations of Negotiation

Hostage tactics and business negotiations are both emotional intelligence approaches. Whether it’s an international hostage crisis, a business deal, or an interpersonal dispute, people have roughly the same decision-making process. They think about how the decision will affect them and what’s at stake.

All people make decisions based on the same basic things, regardless of circumstances.

Fear of loss is a huge factor in any negotiation. Daniel Kahneman, winner of the Nobel Prize in behavioral economics, says that fear of loss stings twice as badly as equivalent gain. As a hostage negotiator, Chris learned to look for that fear of loss and deactivate it. That principle works for any kind of negotiation.

In his role with the FBI, Chris sometimes trained police forces. When he taught negotiation to cops, they didn’t care about the jargon or the theory. They just cared what worked. Chris used those priorities to make his book Never Split the Difference actionable, logical, and easy to absorb, and he used the same guiding principles to develop the Black Swan Method.

The Black Swan Method starts with a basic skill set, then applies core strategies for using those skills, either by themselves or in combination with other skills. Three-quarters of it is derived from the emotional intelligence of hostage negotiation skills. These are a solid foundation because it’s what every hostage negotiation on the planet uses. They are battle-tested and cross-cultural because they tap into human nature.

We often think negotiations are always and only about dollars. But any time the phrases “I want…” or “I need…” cross your lips, you’re in a negotiation. You’re negotiating for whatever it is you want or need, whether or not money is involved.

The most dangerous negotiation is when you don’t know you’re in one.

It’s impossible to negotiate successfully with someone if there isn’t some degree of empathy between you. When you feel like your negotiations are getting nowhere, it’s time to build some empathy and make sure you understand their perspective.

Try to articulate whatever their perspective is, especially the negative aspects towards you.

Before you disagree, stop and rephrase what you think their perspective is. Don’t ask if they think this or that or tell them what they should be thinking. Explain your understanding of what they think, and they will either confirm or correct you. Either way, you’ll be getting closer to the heart of the matter.

A lot of negotiation techniques are focused on getting the other party to say “yes.” Getting them to say “no” instead completely changes the dynamic. Instead of “do you want to do this?” ask “are you against this?” Instead of “do you agree?” ask “do you disagree?” In many of Chris’s negotiations, he changes every common “yes” question into a “no” question.

In negotiations, it can feel like every “yes” is a micro-commitment. It can leave a person feeling like they’re agreeing to something they don’t want to agree to, or that they’re becoming trapped in a deal they’re not sure about. We have been conditioned to feel that when we say no, we are protected. When we can say no, we feel like we have some power and control over the situation. In a negotiation, it leads to more open conversation. A person who has the ability to say no feels like they can say “I don’t disagree, but I need this.” It becomes clearer whether the deal is possible and if it is, what each party will need.

Harvard psychologist Shawn Achor says you’re 31% smarter in a positive frame of mind. Looking at that from another direction, when you’re in a negative frame of mind, you’re dumber. Anger is an especially risky frame of mind in negotiation because it also makes you more convinced that you’re right, even if you’re not.

Some people intentionally try to trigger anger as a negotiation technique because they think it will give them an advantage. This is called “strategic umbrage,” and it’s not an advantage. You may get what you want in the short term, but your long-term losses will outweigh those short-term gains.

To avoid anger, Chris recommends curiosity. Ask yourself “what’s driving that?” or “what’s behind that?” You can’t be angry and curious at the same time.

If you – or the other person – is already angry, Chris uses what the Black Swan Method calls the “late night FM DJ voice.” It deactivates both of you to return you to a calmer state of mind. Another negotiation technique uses dead silence to give both of you space to breathe. The longer your relationship with the other party, the more effective silence will be to defuse anger.

Some people learn negotiation tactics and misuse them to manipulate other people. The best way to avoid being duped is to learn to spot these misapplied negotiation techniques.

Once you notice that gut instinct, don’t just blindly trust it. Use your emotional intelligence skills to test it. This is something Chris teaches through the Black Swan Method. As you test the hypothesis of your gut instinct, your subconscious “supercomputer” gets more accurate.

Let’s say you think someone’s lying to you. Liars have the same problem as someone who hasn’t thought an idea through – they don’t know what comes next. So you ask. “How do we move forward? What’s ahead? How will we accomplish these goals?” A liar won’t have answers because their view of how to proceed won’t match the one they’ve given you.

It is possible to turn the power of “no”-oriented questions from a negotiation technique to a manipulation technique. A common one Chris sees is a cold email asking, “Have you given up on this?” That question is a great way to restart communications if you’ve already started talking and the other party isn’t responding. But for cold emails, you’ve never started those discussions, so there’s nothing to give up on. The asker is using that question to open a negotiation.

Another misused negotiation technique that Chris sees often is the “How” question. A “how” question is a powerful one to get a response. Chris received an email asking, “How do you feel about getting on a Zoom call?” Chris responded with, “That sounds painful.” It’s not a response the asker would get often, because people usually want to be polite. But Chris knows that if there isn’t an agenda for that call, they’re both wasting their time.

As good as your gut instinct is, it’s not 100% accurate. If you get a bad feeling from the other side, proceed with caution and confirm that feeling is appropriate. The more you do this, the better your instincts will become.

In Chris’s experience, you can blindly trust about 70% of the people you interact with. There’s an old African proverb that says, “Someone bitten by a snake is not afraid of ropes.” Your fear of trusting is causing you to miss out on far more good deals than it’s protecting you from bad deals. Proceed with caution, but proceed. Use the Black Swan method to test for the 30% bad actors, and be willing to walk away if you find them, but don’t be afraid to go in and test.

Decision Fatigue and Splitting the Difference

“Decision fatigue” is the idea that you only have the capacity to make so many decisions per day, and once you reach that limit it becomes much harder to make decisions at all, let alone good ones. To Chris, decision fatigue is never a good reason to split the difference.

Everyone, no matter how tired, can respond positively to a “no”-oriented question. Chris once had an intern who was always asking for direction. He found it exhausting to answer in the afternoon. Eventually, he put down a new rule: Any question the intern asked after 1 P.M. had to be a “no”-oriented question. When the intern said, “I’m thinking about doing this,” it was much easier for Chris to respond, “No, I need you to do this and this instead.”

If you split the difference in the first place, you mentally “ran out of gas” for negotiating.

If you are a hostage, you don’t want your hostage negotiator trying new techniques. You want them to use techniques that they’ve practiced over and over again and know by heart. The same principle applies for your negotiation skills. If you want to use them, you have to practice them.

Small-stakes practice for high-stakes results. You have to test drive the skills.

Opportunities to practice these skills are everywhere. You interact with people – grocery store clerks, gas station checkout people, the delivery person – all the time. Take a shot with your skills to see if you can positively affect their mood. If you’re nervous about a brand-new skill, Chris’s rule is to try it four times. This isn’t enough to hardwire it, but it gives experiential data. Once you’ve tried it four times and seen that it works, you’ll be less nervous to try it more.

Chris Voss is the founder and CEO of the Black Swan Group. Visit their website at blackswanltd.com. Click on the “Blog” tab at the top and sign up for their newsletter to get free, actionable advice in your inbox every Tuesday morning.