Without IP Addresses, the Internet Would Disappear 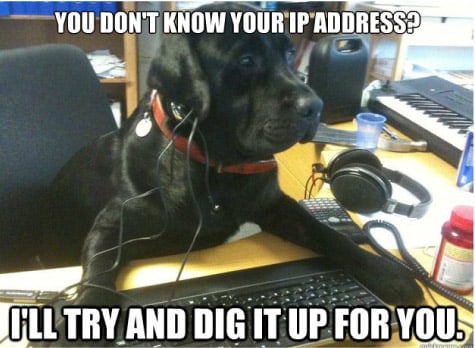 You’ve probably heard of an IP address and understand that it has something to do with your Internet.

However, if you don’t fully grasp what IP means, don’t worry – you’re not alone.

Although your IP address provides the passport to all things Internet-related, there aren’t many instances where you’ll need to know it.

An IP (Internet Protocol) address is a network address for your computer, so the internet knows where to send your emails, data, and killer “monkey in a tutu” memes. In the days of snail mail, if you wrote a heartfelt letter to your Grandma Betty, stamped it, and put it in the mailbox but didn’t include an address, Grandma Betty would never read your kind words because the mailman wouldn’t know where to send it.

The Internet works in a similar way–the data sent online needs a space to land, or it will just float around, lost in cyberspace.

Understanding even the basics of an IP address and what IP stands for puts you ahead of most Internet users. However, there are a plethora of IP address types, and each has a different designation.

We’ll break down the importance of IP addresses, explain the types of addresses in layman’s terms, and won’t inundate you with technical speak. In the end, you’ll love and understand your IP address.

Everything You Need to Know About Your IP Address

IP addresses are like the central nervous system of the World Wide Web. Without IP addresses, the Internet would revert back to its prehistoric days. Your 10-year-old nephew would no longer be able to teach you about its intricacies. Tech firms would still tout information technology, but none of us would understand what that means. All of the information you digest daily online would disappear.

The IP address can trace its origins back to the early days of the ARPANET – the grandfather of the Internet created to allow the United States Department of Defense computers to communicate with each other. That protocol system—the rulebook for how to connect and talk to other network computers—was the foundation of what became the TCP/IP protocol system, which is used on the Internet and on other computer networks worldwide. In order for the Internet to work properly and to remain globally accessible, your computer needs an IP address to connect to and “speak with” other computers. Without an IP address, our computers would all scream into the void, and no one would be able to hear them.

Today, your IP address is configured and created by that very same TCP/IP protocol system—so that whenever you’re on a computer and have access to a network (at home, at work, at an airport or hotel), you and your computer can join in on the online fun.

Your home has a street number; your computer (and your smartphone, your smart thermostat, and anything else that connects to the internet) has an internet number.

Do you want to know something extra cool? Every website has a unique IP address, but when you connect to the site, you only see the domain name. For example, when you go to amazon.com, you don’t see the string of numbers that makes up its IP address; you just see “amazon.com.” But if Amazon didn’t have an IP address, you couldn’t connect with their website, and they couldn’t tell you what they have for sale.

So now that we’ve covered what IP addresses are and why they’re needed, we’ll dive deeper into everything you need to know about your IP address. You’ll wow your tech professional friends with your comprehensive knowledge. Let’s take a look at the definitions and examples of different types of IP addresses.

The most common type of IP address is known as IPv4, for “IP version 4.” Here’s an example of what an IPv4 address might look like:

An IPv4 address consists of four numbers, each of which contains 1-3 digits, with a single dot (.) separating each number. Each of the four numbers can range from 0 to 225. This group of numbers creates a unique address to let worldwide users send and retrieve data over internet connections.

What happens if we run out of IP addresses?

What went wrong? The past decade has seen explosive growth in the number of devices connected to the internet, from mobile phones to tablet computers and wireless handheld devices. The format of IPv4 wasn’t designed to handle the sheer number of IP addresses we need.Fortunately, there was a backup IP address type waiting in the wings.

If your eyes glazed over when reading that number, rest assured there’s no chance of IP addresses ever running out again.

For more information on IPv6, check out these frequently-asked questions about IPv6.

In the vast world of IP addresses, it helps to know which type of address your computer system is accessing. Private IPs, also known as “local” IPs, are the typical space for your home network. A private IP is set by your Internet service provider, and can be found on your router. An example of a private IP set by a provider comes from Linksys routers, which use the IP address 192.168.1.1 for Linksys customers.

A private IP address isn’t visible outside of a private network. So although each Internet service carrier uses a universal private IP, a port translator carrier translates that address uniquely for each device. Let’s take a look at how this works:

While you share your private IP with a plethora of other devices, the port translator allows your device – and only your device – to receive data targeted to you. In real life, it would work like snail mail in a huge university or apartment complex.  For example, if you live on a college campus with 30,000 other students, your main address will be identical to all other students who live in the dorms. However, your unique dorm and mailbox number allows mail to come directly to you.

Should you hide your IP address?

Your IP address is your passport to the Internet. But it also gives away your location and is used to profile your individual online activity.

Can you do that?

Yes! And you can learn how right here. Scammers are always on the lookout for new ways to part you with your money. Sometimes they… Google was experiencing ongoing troubles with employees being fooled, tricked, duped and hacked by scammers. Scammer’s were... How to Beat Scammers and Phishers at Their Own Game!

2FA is an extra step at login that ensures only you can log into your accounts, EVEN...